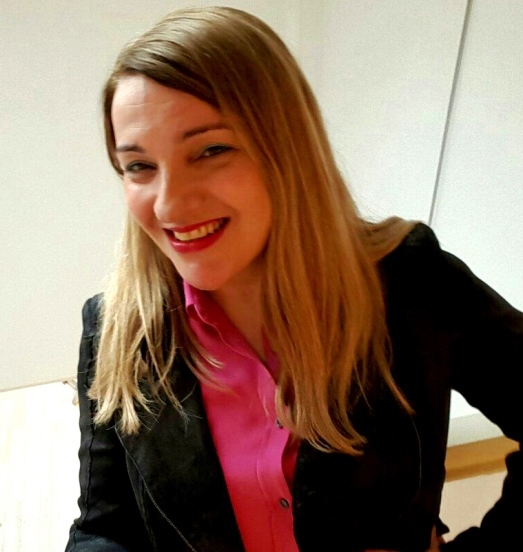 Born in Parma, Daniela Monica attended first the local Art Institute Toschi then she graduated at the Academy of Fine Arts in Bologna, under Concetto Pozzati.

Initially she worked as a graphic designer in Parma, then moved to London where she remained for five years. In London she worked as an illustrator and a painter, and in the latter capacity she took part in various English contemporary art collective exhibitions. It is during this time, in fact, that she produced some series of pictorial works in which the viewer can perceive echoes from such atmospheres as can be found in the works of artists like David Hockney or Edward Hopper.

Since her return to Italy in the Nineties, her painting studio has been located on the upper floor of Medardo Monica Furniture Company (1). Daniela thus participated in the realization of some minimalist furniture designed by her brother Andrea. During the furnishing construction of villa Barilla in Parma run by her brother and father Ruggero, she painted extensive Trompe-l’Oeils in the children bedrooms.

Still in the Nineties, with the writer Giorgio Messori she frequented the home of photographer Luigi Ghirri and his wife Paola Bergonzoni in Roncocesi. Daniela participated in the meeting of different sensibilities within the fertile intellectual and cultural activity linked to the figure of Gianni Celati and  Luigi Ghirri that gathered around them writers, photographers, painters and filmmakers from the Emilia area.

From a stay in Japan comes a series of large pastels, watercolours and oil paintings that she exhibited in Parma in 1992 at the Galleria Consigli Arte, entitled La Natura dell’Incanto | The Nature of Enchantment.

In the year 2000 she made the series of paintings Le Cafè of Changing of the Guards that symbolizes the desire for a change in the encounter of different identities. Changing of the Guards is a magic song by Bob Dylan “adopted” by Daniela in the version sung by Patty Smith to express her heartfelt desire to change.

Along with Cathy Josefowitz and Grati Baroni, with whom she maintains a deep friendship for more than a decade in Paris, she invents playful series of Josephine and Daphne, Maeght–Maeght and Tate-Tate.

Her practice of listening to music while painting evolves, in a large pictorial production that maintains a strong love relationship with music. Hence the series of paintings Buckets of Rain, on view at the 2007 exhibition at the Contemporary Art Gallery 8,75 in Reggio Emilia. This series takes its title from a Bob Dylan song; whose lyrics and music have helped orienting the artist to the understanding of contemporary identity.

In 2010 at the Palazzo Bentivoglio, Gualtieri, Reggio Emilia in the collective exhibitions Veritas she exhibits large paintings from the series of red colours Tate-Tate and No Panic.

Her solo exhibition in 2010 La Dispersione degli Istanti | The Dispersion of Istants at the International Line in Parma brings together urban landscapes, rarefied atmosphere and characters caught from behind, actors in a Caspar David Friedrich setting and even moments found in Postcards sent from the Future.

In 2013 she exhibited Stages in Fotografia Europea Festival Circuito Off and always in 2013 at the Spazio Audiomedica in Parma, paintings and photographs titled Profonda Apparenza  | Deep Appearance.

In 2015 she has a solo exhibition at the Galerie Etienne de Causans, Paris  Le Paysage des Corps | The Body Landscape  and a solo exhibition in Parma, at the A+10 Art, Architettura & Design, Il Paesaggio dei Corpi | The Body Landscape  Finissage with a dance performance by Manfredi Perego and Chiara Montalbani. Also in 2015 is the collective exhibition Fragile Warriors call to Arts, Rome,  Lavatoio Contumaciale,  Roma.

In 2016 at the HaPs Gallery in Berlin: Schweben | Suspended. In Parma Dare Corpo al Sogno | Donner le Corps au Rêve | Give Body to Dream, with paintings by Daniela Monica, and photographs by Gregory Augendre-Cambon. In 2016 she exhibited Sospesa |Schweben | Suspended in Fragile Warriors call to Arts, in Florence and Parma Palazzo Rosa Prati,  Parma.

2017 She exhibited in Rome Figure Sospese | Suspended Figures at the Galleria Romalibera. 2018, Precipita Piano | Fall Down Slowly paintings and photographs, at the Finisterre Taller de Arte, in Parma.

Her works are in various collections in Italy and abroad. She lives and works in Parma.

(1) Monica Medardo ebanist, designer and manufacturer of furniture in Parma was the paternal grandfather of Daniela. The Medardo Monica Furniture Company was brought together with his son Ruggero and grandson Andrea.

Museum Collection: Some works of Daniela Monica are on show at the Foundation Cariparma Museum Bocchi- Bossi in the Palazzo Bocchi- Bossi in Parma. https://catalogo.fondazionecrp.it/risultatoricerca.asp?pgCurrent=&pgCount= (Author: Monica Daniela + execute search).